Richard Branson announced (via the website VirginVolcanic.com) that his company, Virgin, had developed a vehicle "capable of plunging three people into the molten lava core of an active volcano." With this vehicle, he planned on journeying to the cores of five active volcanoes: Etna, Stromboli, Yasur, Ambrym and Tinakula. 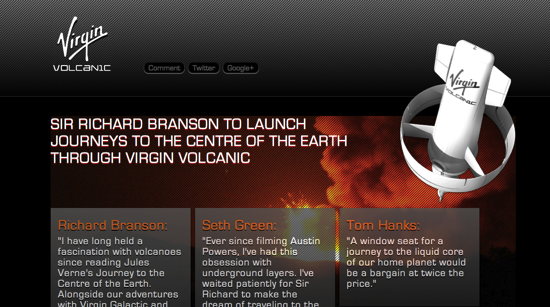 Branson said that his companion Volcanauts on these voyages would be actor Tom Hanks, musician Will.i.am, actor Seth Green, and filmmaker Barbara Kopple. But he invited members of the public to apply to join the "Virgin Volcanic back-up team".

And in the future Branson hoped to be able to offer commercial transportation that would go "through the Earth rather than round it," traveling from Hawaii to Naples via molten lava flows. 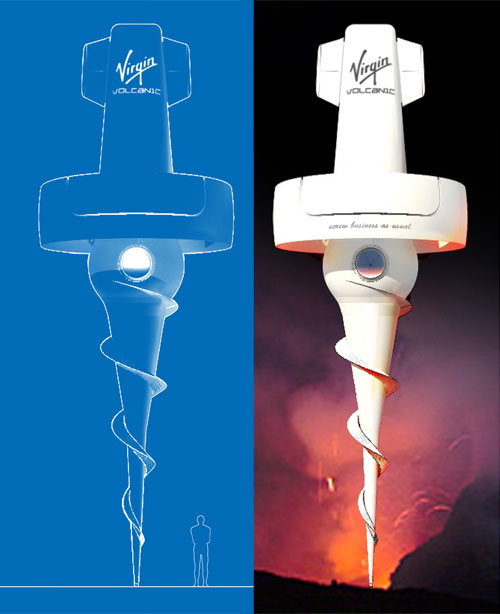 Richard Branson launches journeys to the centre of the Earth through Virgin Volcanic
(Republic of Vanuatu - April 1, 2012) Only 500 people have been to space, only three people have been to the bottom of the ocean, but no one has ever attempted to journey to the core of an active volcano. Until now.

Using patented carbon-carbon materials pioneered for deep space exploration, Virgin is proud to announce a revolutionary new vehicle, VVS1, which will be capable of plunging three people into the molten lava core of an active volcano.

In its first three years of operation, VVS1 will target the five most active volcanoes in the world: Etna, Stromboli, Yasur, Ambrym and Tinakula.

Tom Hanks said: "A window seat for a journey to the liquid core of our home planet would be a bargain at twice the price."

Documentary filmmaker Barbara Kopple has closed a deal with Virgin Produced to direct a documentary around the Virgin Volcanic project utilising groundbreaking 3D technology called VD. Additionally, recording artist (and passenger) Will.i.am plans to record the first volcanic soundtrack for the film, recorded entirely inside a live active volcano. The soundtrack will be released in conjunction with the documentary.

Volcanologist Frederick Smith, based in the Republic of Vanuatu currently conducting preliminary tests on Yasur, said: "The project will derive important scientific results to help control and monitor active volcanoes. It is believed a new level of the Volcanic Explosivity Index could be found above and beyond the current high of Level 8 – Supervolcanic."

The team behind Virgin Volcanic believes going to the core of the five most active volcanoes is just the first step. In future this technology can be developed as a clean, safe and fast alternative to trans- continental commercial aviation. By taking the heat from molten lava Virgin Volcanic plans to develop a totally renewable energy source to power the VVS1. It is seen as a way to literally fulfil Richard Branson's philosophy of screwing business as usual.
This would involve going through the Earth rather than round it. Experts predict that one could travel from Hawaii to Naples in a couple of hours via the molten lava flows, with passengers boarding and disembarking from a network of "Earthports" close to the world's volcanoes.