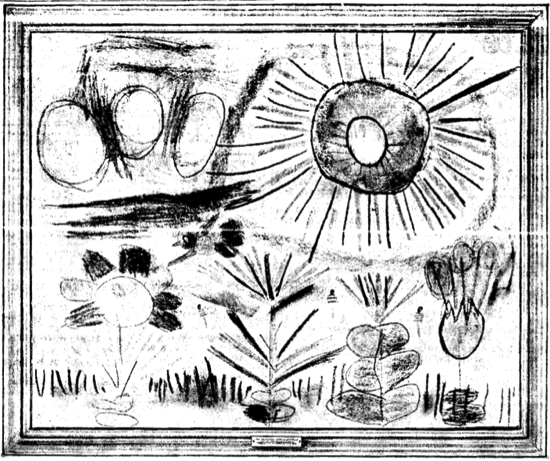 Wisconsin's Sheboygan Press reported that an anonymous buyer had purchased one of Vincent Van Gogh's "great masterpieces" and was donating it to the John Michael Kohler Art Center. The work (pictured above) was a "pencil-and-Crayola" drawing titled "A Prity Day." It was purchased for $186,000. Van Gogh created the work in 1860. (Note: Van Gogh was born in 1853.)

The Sheboygan Press reported that the work had long been "a favorite with the intellectual art community," and that one scholar had "devoted nearly five years to analyzing it."


A $186,000 Masterpiece...
Van's Work -- Gogh, Gogh, Gone!
One of the great masterpieces of Dutch artist Vincent Van Gogh has been purchased for the John Michael Kohler Art Center, it was announced today.

The drawing — pictured above — was purchased by an anonymous local person at a Parke-Bernet auction in New York City, for an estimated $186,000.

It has been sent, under heavy guard, to Sheboygan. Local officials declined to delaborate, but it is believed that elaborate protection measures are being planned here. Chief of Police Oakley Frank declined to reveal details of those measures.

Van Gogh (1853-1890), is recognized as one of the truly great European masters. This artwork, an interpretation of a garden in Groot-Zundert, in the Province of North Brabant, the Netherlands, is dated 1860.

Local artists were excited by the purchase of the noted pencil-and-Crayola drawing. Raymond Van Handel Jr. spoke for many when he termed it "a major step towards creating a more art-conscious community."

One local businessman commented that the purchase of the drawing, "could be a major step toward revitalizing the downtown area."

Van Handel admitted that there may be some problems. "A work like Van Gogh's may be too sophisticated for the taste of the average layman. There's a maturity of style, an awesome, overriding subtlety. But we're hoping that this will help establish a greater sophistication among those who come to see it."

The drawing, appropriately titled "A Prity Day," has been a favorite with the intellectual art community. Van Handel pointed out that one art professor has devoted nearly five years to analyzing it.

"Even after all that time, he can still discover new statements, new meanings in it. Particularly fascinating is the use of lines, extending from the perimeter of the sun. Scholars have debated for years just what statement Van Gogh is trying to make here."

The lines start from various points throughout the outside circumference of the sun. They extend out from the perimeter, creating a feeling of brightness or warmth. It is an effect that Van Gogh repeated in his famous "A Mumy Sweeping a Walk" (1861).