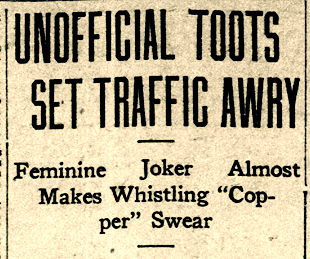 It was late in the afternoon, when the third busiest street corner of the United States was being swamped with cars, automobiles and trucks. Policeman Harry Harper and his fellow members of San Francisco's traffic squad were directing the streams of vehicles. A large number of wagons and machines were standing in Ellis, Fourth and Stockton streets, waiting for the whistle from the policeman. Meanwhile the flow of vehicles was taking place east and west in Market street.

Suddenly some one with a police whistle like that used by the traffic squad gave the two blast signal for the cross street vehicles. A jam ensued. Harper gave one blast with his whistle to stop the cross town traffic. Simultaneously the joker tooted the whistle for traffic in the opposite direction. Then followed more jams and more whistles. Traffic in all intersecting streets was brought to a standstill. The curbs became lined with people, and patrolmen from their beats rushed to Officer Harper's assistance.

After considerable shouting, coaxing and signaling the traffic was resumed. But again the whistle and again the jam. This time Harper tightened his belt, left his job and rushing into one of the nearby office buildings caught the culprit. Much to his surprise he found the joker to be a young woman. A severe reprimand was given by Harper to the fair joker and he resumed his station.