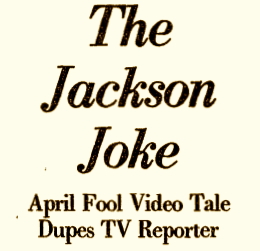 On Cable magazine reported that a huge publicity blitz was being planned around an upcoming Michael Jackson song, "Tingle." The song was said to be three minutes and twelve seconds long, and a video of it would feature Jackson walking out of a boutique and catching fire. Jackson's record company had reportedly also developed a 37-minute promo clip to hype the video, and this promo was, in turn, being developed into a 3-hour film by Paramount. Three video versions of the song would be sold: "Michael Jackson's 'Tingle'" for $39.95; "Making the 'Tingle' Video" for $79.95; and "The Making of 'The Making of the "Tingle" Video'" for $99.95. MTV was going to show the 37-minute promo clip hourly. Parker Brothers would release a board game designed around it. Pepsi would be the official soft drink of the video, and Allstate would sell "exclusive fire insurance" along with the video.