The Daily Mail published an article titled "Do not adjust your set—it could be your bra!" in which it reported that 10,000 brassieres made by a local manufacturer had developed a serious problem. The support wire in the bras had been fashioned out of specially treated copper originally been designed for use in fire alarms. When this wire came into contact with nylon and body heat, it was producing static electricity which, in turn, was being emitted by thousands of unsuspecting women, causing interference with the reception of television signals throughout the country. As the article put it, "Widespread television interference, which has brought complaints from viewers all over Britain in recent weeks, is being caused not by unusual atmospheric conditions, but by 10,000 'rogue' bras."

The Daily Mail advised women to conduct a simple test to determine if their bra was "rogue": "After wearing the bra for at least half an hour, take it off and shake it a few inches above the TV." The paper displayed a picture of a model shaking her bra above a TV in order to show women how to perform the test.

Hundreds of readers took the article seriously. Among the readers who were fooled was the chief engineer of British Telecom who, according to later reports, upon reading the article immediately called his office and asked that all his female employees be checked to see if their bras were interfering with any electronic equipment. 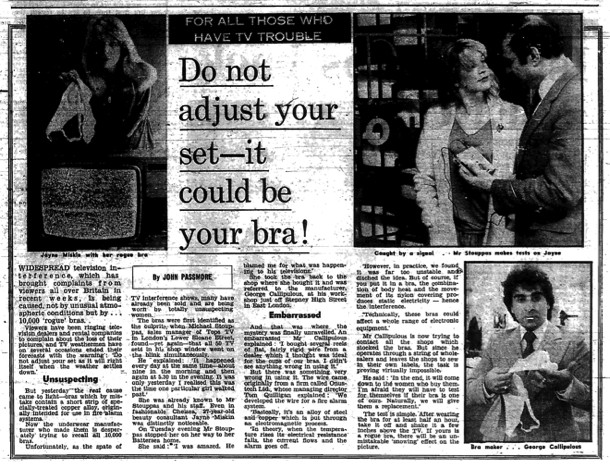