In the days leading up to April 1st, notices appeared in Frankfurt papers informing the public that a legendary "snow-white elephant" from Burma would, for a few days only, be on display at the zoo. Traveling in a specially built railway car, it was en route to the Copenhagen Zoo, which was to be its permanent home. It was accompanied by its Burmese handlers, who were dressed in their traditional robes and head coverings. 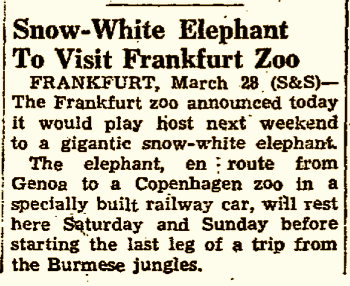 The Stars and Stripes (European Edition) - March 29, 1949
On April 1st, over 1000 Frankfurters turned out to see the white elephant, paying a mark each. And they did get to see a white elephant, but it was a regular female Indian elephant that had been painted white. However, the majority of the audience didn't realize this. They learned the trick later by reading about it in the papers. 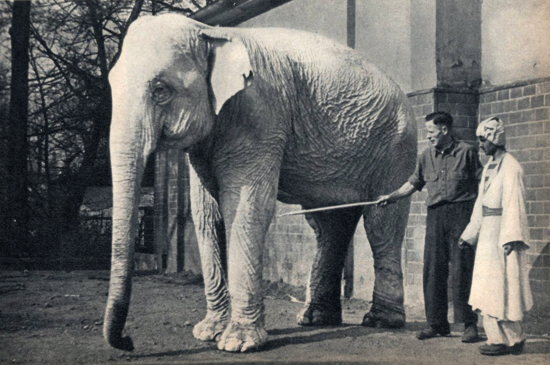 The joke was the idea of Bernhard Grzimek, who had been made director of the Frankfurt Zoo in 1945. He was known for using any means — including festivals, dances, and hoaxes — to lure the public back to the zoo following the war.