The Independent reported on its front page that Labour Party member Tony Blair, who was campaigning to become prime minister, had offered former Conservative prime minister Baroness Thatcher a position as ambassador to Washington if she would endorse his candidacy in the general election and Labour were to win. It also said that Thatcher had expressed her admiration for Blair's "disciplined determination." The story was picked up by wire services and consequently reported as fact by the Australian Broadcasting Company, forcing it to subsequently issue a retraction. In reality, Thatcher had described Blair as a "boneless wonder." 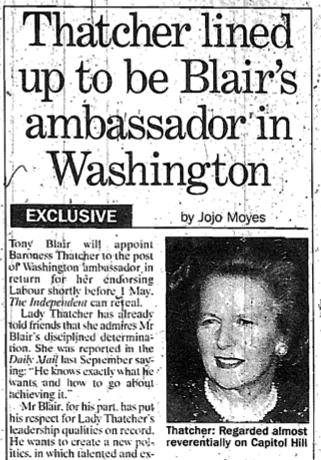