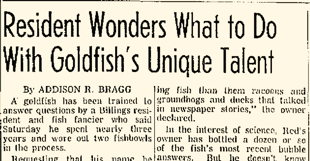 
Resident Wonders What to Do With Goldfish's Unique Talent
by Addison R. Bragg

A goldfish has been trained to answer questions by a Billings resident and fish fancier who said Saturday he spent nearly three years and wore out two fishbowls in the process.

Requesting that his name be withheld to avoid what he called "scornful skeptics" the man said his fish could "hold its head up with any talking horse of chess-playing dog."

The fish, he said, started "talking" in the late summer of 1952 but its unique talent went unnoticed until about a year later.

"The bowl sat on our radio," the fish's owner recalled, "and you know the political talks started about then."

The fish — who answers, literally, to the name of "Red" — first attracted attention by an unusual amount of bubbling just before feeding time.

"The bubbles," its owner said, "were what started us watching him." They came sometimes in steady streams or at other times in groups of only three or four.

"I was the one who first noticed Red bubble once or twice when I asked him a question," the Billings man said.

Replying to a question about his appetite, Red sent up one bubble if he was hungry. If two bubbles came up just before food was dropped in the water, the food was wasted, the owner continued.

Neighbors have come in to look at the talking fish. "But they spend more time watching me," the man added.

The goldfish's proud owner conceded that quite frequently Red gave the wrong answer to a question. Like the time he sent up a one-bubble answer when asked if he was a fake talking fish.

This, the man said, was a "minor" thing and could be overlooked by a sympathetic observer.

"Red's not anymore a fake talking fish than them racoons and groundhogs and ducks that talked in newspaper stories," the owner declared.

In the interest of science, Red's owner has bottled a dozen or so of the fish's most recent bubble answers. But he doesn't know whether to send them to the Library of Congress or the Smithsonian Institution.

Red is no help at all. He just rolls lazily around in his bowl, sending up two groups of bubbles. Five bubbles first. Then four.