The Daily Journal, based in Kankakee, Illinois, reported that a Soviet space capsule had landed just outside of the city. Apparently the cosmonauts had seriously miscalculated their trajectory during reentry. The Soviet government was said to be keeping its silence about the capsule. An accompanying photograph showed a space capsule with a hammer and sickle displayed on its side. The article said that one of the cosmonauts was named Lirpa Loof, who had been missing for over a year. Many people drove to the supposed site of the landing to see the capsule. 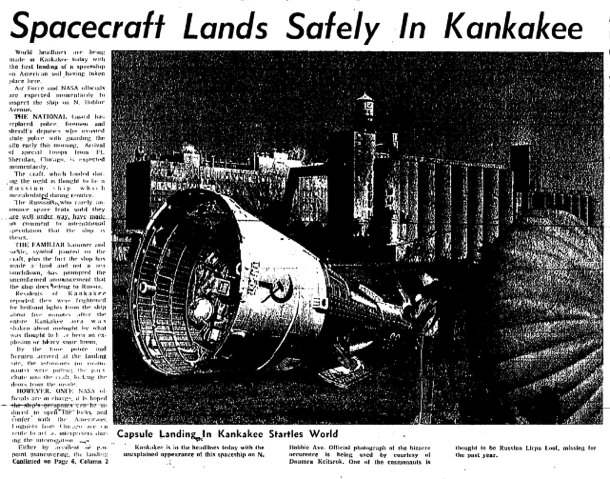 Spacecraft Lands Safely In Kankakee
World headlines are being made in Kankakee today with the first landing of a spaceship on American soil having taken place here.

Air Force and NASA officials are expected momentarily to inspect the ship on N. Hobbie Avenue.

The National Guard has replaced police, firemen and sheriff's deputies who assisted state police with guarding the site early this morning. Arrival of special troops from Ft. Sheridan, Chicago is expected momentarily.

The craft, which landed during the night is thought to be a Russian ship which miscalculated during reentry.

The Russians, who rarely announce space feats until they are well under way, have made no comment to international speculation that the ship is theirs.

The familiar hammer and sickle, symbol painted on the craft, plus the fact that the ship has made a land and not a sea touchdown, has prompted the unconfirmed announcement that the ship does belong to Russia.

Residents of Kankakee reported they were frightened by brilliant lights from the ship about five minutes after the entire Kankakee area was shaken about midnight by what was thought to have been an explosion or heavy sonic boom.

By the time police and firemen arrived at the landing site, the astronauts (or cosmonauts) were pulling the parachute into the craft, locking the doors from the inside.

However, once NASA officials are in charge, it is hoped the ship's occupants can be induced to open the locks and confer with the Americans. Linguists from Chicago are on route to act as interpreters during the interrogation.

Either by accident or pinpoint maneuvering, the landing was effected so intricately that no signs of damage to surrounding property are visible, and no injuries have been reported.

Observers at the scene say there appear to be at least three men aboard who have been seen looking from a window.

Photo Caption: Capsule Landing In Kankakee Startles World
Kankakee is in the headlines today with the unexplained appearance of this spaceship on N. Hobbie Ave. Official photograph of the bizarre occurence is being used by courtesy of Dnamra Keitsrok. One of the cosmonauts is thought to be Russian Lirpa Loof, missing for the past year.