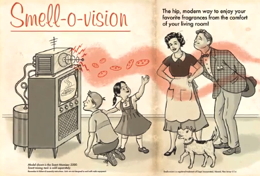 BBC TV interviewed a professor from London University who had perfected a technology he called "smellovision." It allowed viewers to smell aromas produced in the television studio in their homes. The professor explained that his machine broke scents down into their component molecules which could then be transmitted through the screen.

The professor offered a demonstration by placing first some coffee beans and then onions into the smellovision machine. He asked viewers to report by noon whether they were able to smell anything, instructing them that "for best results stand six feet away from your set and sniff." Viewers called in from across the country to confirm that they distinctly experienced these scents as if they were there in the studio with him. Some claimed the onions made their eyes water.