Canadian airline WestJet announced it would be converting overhead compartments on its planes into sleeper cabins:

WestJet (TSX:WJA) today announced that on April 1, 2008, sleeper cabins will be introduced onboard its existing fleet of 73 Boeing 737 Next-Generation aircraft. These sleeper cabins can be booked on all of WestJet's existing flights for a nominal incremental fee of $12...
"The overhead compartment has traditionally been a place where guests have placed their carry-on baggage. Given that the overhead bins on our fleet are among the most spacious of any airline, we made the decision to offer sleeper cabins in that space." 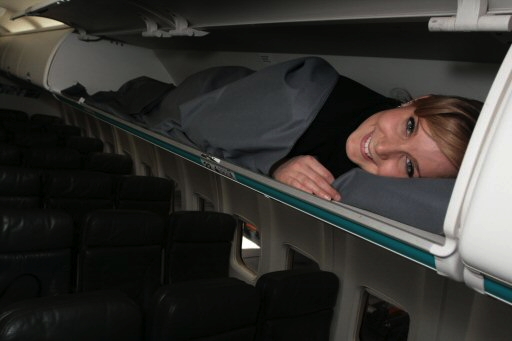