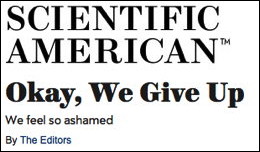 Scientific American ran an editorial, titled "Okay, we give up," revealing that the magazine would henceforward give equal space to the views of Creationists:


"This magazine's coverage of so-called evolution has been hideously one-sided. For decades, we published articles in every issue that endorsed the ideas of Charles Darwin and his cronies… Where were the answering articles presenting the powerful case for scientific creationism? Why were we so unwilling to suggest that dinosaurs lived 6,000 years ago or that a cataclysmic flood carved the Grand Canyon? Blame the scientists. They dazzled us with their fancy fossils, their radiocarbon dating and their tens of thousands of peer-reviewed journal articles… Good journalism values balance above all else. We owe it to our readers to present everybody's ideas equally and not to ignore or discredit theories simply because they lack scientifically credible arguments or facts."
April Fool's Day Science Hoaxes April Fool's Day Hoaxes by Magazines and Journals April Fool's Day, 2005
Tweet