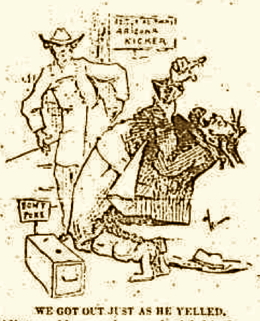 "Monday forenoon we received by stage from Captain Jackson of the Jackson ranch a beautiful pair of rattlesnakes which had been captured by some of his cowboys. We were arranging to forward them to Chicago and left the box for an hour or so on the front steps of The Kicker office. For fear that some idiot would come along and stick his finger into one of the holes bored for ventilation we printed and hunt out a sign of "Don't Poke!"

It hadn't been out 10 minutes when that old critter of a Bill Henderson came along, and being about half slewed he took the sign and the box for an April fool joke and deliberately poked.

We got out just as he yelled, one of the snakes having bitten him, of course. We ran him into the butcher shop and cut off the finger and sent for a doctor, and during the next hour we got three quarts of whisky down his neck.

He is still drunk, but the poison has been neutralized, and he will come out on top. The next time he sees a hole and a sign of "Don't Poke!" he will probably stop to find out whether the hole is an underground route to Tombstone or stops short against something with teeth. He can have his missing finger by calling at this office, though we believe we could legally claim it as a relic."
[The Gazette and Farmers' Journal — Apr 27, 1893]
Mistaken for April Fools April Fool's Day in the 1890s
Tweet