BMW revealed that one of its engineers, Herr Blöhn, had developed a sunroof that could be kept open even in the rain, thanks to jets of air that blasted the water away from the top of the car. The system worked completely automatically, even in a car wash.

Those seeking more information were directed to query "Miss April Wurst" in the BMW marketing department. 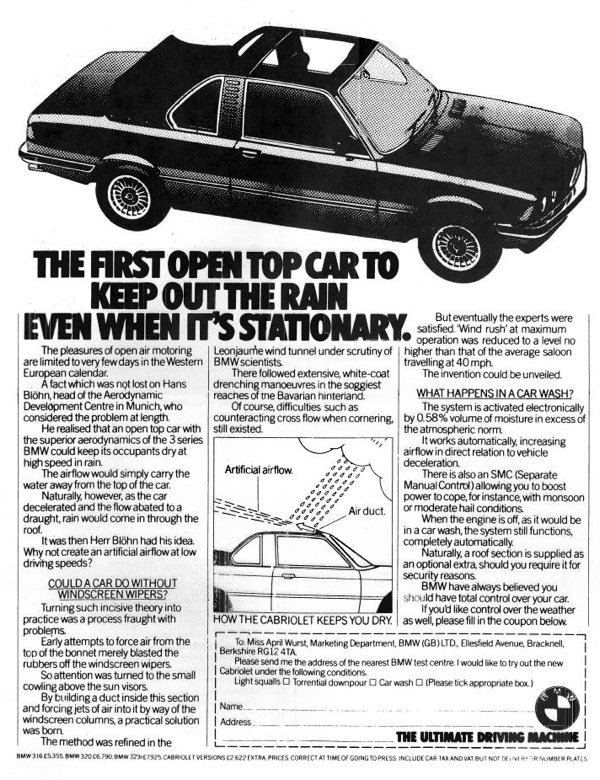 The pleasures of open air motoring are limited to very few days in the Western European calendar.
A fact which was not lost on Hans Blöhn, head of the Aerodynamic Development Centre in Munich, who considered the problem at length.
He realised that an open top car with the superior aerodynamics of the 3 series BMW could keep its occupants dry at high speed in rain.
The airflow would simply carry the water away from the top of the car.
Naturally, however, as the car decelerated and the flow abated to a draught, rain would come in through the roof.
It was then Herr Blöhn had his idea. Why not create an artificial airflow at low driving speeds?

COULD A CAR DO WITHOUT WINDSCREEN WIPERS?

Turning such incisive theory into practice was a process fraught with problems.
Early attempts to force air from the top of the bonnet merely blasted the rubbers off the windscreen wipers.
So attention was turned to the small cowling above the sun visors.
By building a duct inside this section and forcing jets of air into it by way of the windscreen columns, a practical solution was born.
The method was refined in the Leonjaume wind tunnel under scrutiny of BMW scientists.
There followed extensive, white-coat drenching manoeuvres in the soggiest reaches of the Bavarian hinterland.
Of course, difficulties such as counteracting cross flow when cornering still existed.
But eventually the experts were satisfied. 'Wind rush' at maximum operation was reduced to a level no higher than that of the average saloon travelling at 40 mph.
The invention could be unveiled.

WHAT HAPPENS IN A CAR WASH?

The system is activated electronically by 0.58% volume of moisture in excess of the atmospheric norm.
It works automatically, increasing airflow in direct relation to vehicle deceleration.
There is also an SMC (Separate Manual Control) allowing you to boost power to cope, for instance, with monsoon or moderate hail conditions.
When the engine is off, as it would be in a car wash, the system still functions, completely automatically.
Naturally, a roof section is supplied as an optional extra, should you require it, for security reasons.
BMW have always believed you should have total control over your car.
If you'd like control over the weather as well, please fill in the coupon below.
April Fool's Day Automobile Hoaxes April Fool's Day, 1983 BMW's April Fool Hoaxes
Tweet