Qualcomm unveiled a plan to expand wireless coverage by implanting tiny base-stations into wolf-pigeon hybrids. The wolf-pigeons would fly around, but also be self-defensible, form packs when needed, and go out as "lone wolves" to areas where you wouldn't normally have coverage, thereby creating a strong network.

Unfortunately, the wolf-pigeons tended to overpopulate, run amok, and cause havoc amongst the human population. This created the need for "Shark Falcons," whose objective was to keep the wolf-pigeon population under control.

Thinking ahead, Qualcomm engineers also anticipated a need to keep the Shark Falcons under control and had drafted plans for a Crocodeagle (crocodile-eagle hybrid) which would be four times bigger than the Shark Falcon, "so they're always going to win." 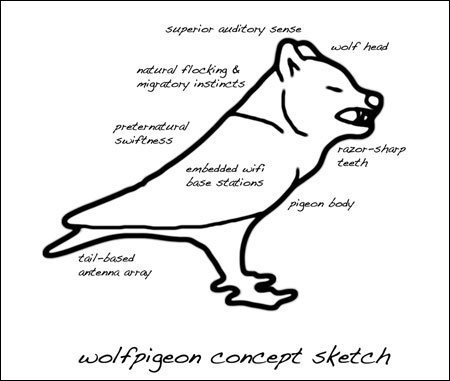