BMW announced the limited availability of a porcelain statuette of the BMW Z8, created by the "legendary Prussian ceramicist" Loof Lirpa. Every statuette came with a "Loof Lirpa Certificate of Authenticity." The actual size of the statuette, a note at the bottom of the ad revealed, was 15ft x 5ft.

[Note: I don't know when or where this ad ran. The BMW Z8 was produced between 1999 and 2003, so presumably this ad ran at some point in that time period.] 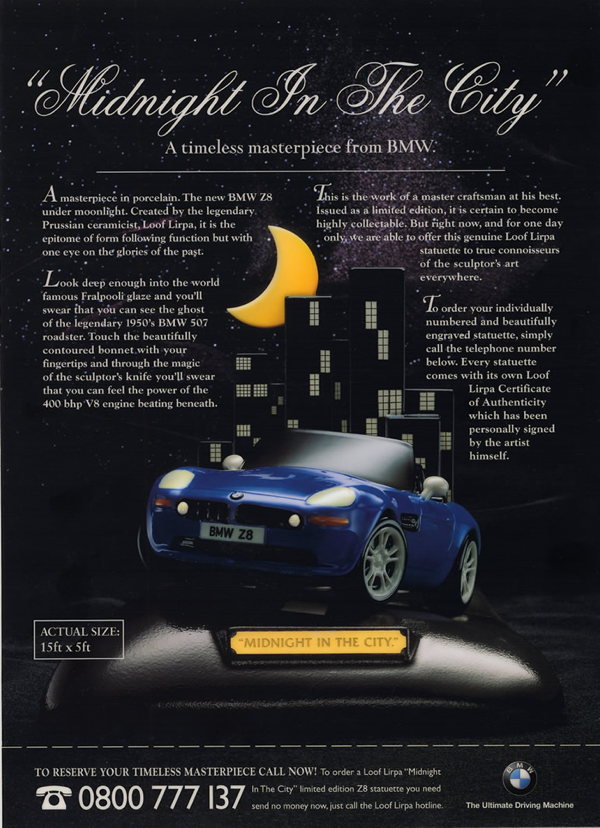 "Midnight In The City"
A timeless masterpiece from BMW

A masterpiece in porcelain. The new BMW Z8 under moonlight. Created by the legendary Prussian ceramicist, Loof Lirpa, it is the epitome of form following function but with one eye on the glories of the past.

This is the work of a master craftsman at his best. Issued as a limited edition, it is certain to become highly collectable. But right now, and for one day only, we are able to offer this genuine Loof Lirpa statuette to true connoisseurs of the sculptor's art everywhere.

To order your individually numbered and beautifully engraved statuette, simply call the telephone number below. Every statuette comes with its own Loof Lirpa Certificate of Authenticity which has been personally signed by the artist himself.