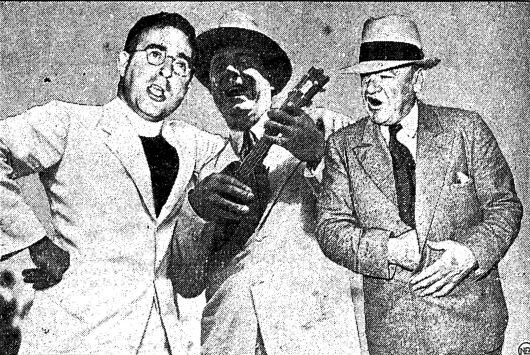 Here is the first picture of the new Harmony Three formed by Father Coughlin, Senator Long and General Johnson. After weeks of bitter wrangling about financial problems they have accepted a vaudeville contract which solves for them, personally, at least, all further worries about money. They were snapped during a rehearsal of their opening number, which begins like this:

Note how enthusiastically the General, who sings bass, is coming in on the last note. Each member of the trio also does a specialty turn. Father Coughlin sings: 'Love Thy Neighbor.' Senator Long performs a political contortion by straddling a fence, keeping an ear to the ground, and playing 'Every Man a King' on the big bassoon— all at the same time. General Johnson does an interpretive dance, 'The Dying Eagle,' in the manner of Mary Wigman.
[Picture distributed by the Newspaper Enterprise Association]
April Fool's Day Political Hoaxes April Fool's Day, 1935 April Fool's Day Photo Hoaxes
Tweet