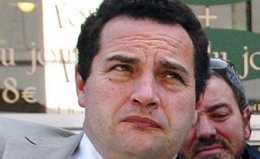 French MP Jean-Frédéric Poisson (shown) proposed a law that would protect politicians with "aquatic animal surnames" from being ridiculed. ("Poisson" in French means "fish" — "poisson d'avril" is the equivalent of "April fool").

His proposal was backed by fellow MPs Franck Marlin and Philippe Goujon. (Marlin and Goujon, or gudgeon, both being types of fish.) They said, "We other aquatic MPs are very concerned about the respect of biodiversity and anything said against us could reduce biodiversity."