A Berlin newspaper reported that a large find of mummies and Egyptian antiquities had been unearthed during the excavation of an extension of the city's underground railway. The paper quoted an expert, Dr. Lirpa, who said that the find rivaled Tutankhamen's tomb and indicated "the presence of an Egyptian colony in Germany in prehistoric times."

Archaeologist Howard Carter, shown in the picture below, had recently — on Feb. 16, 1923 — opened the burial chamber of Tutankhamen. 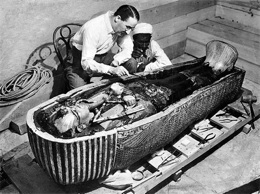