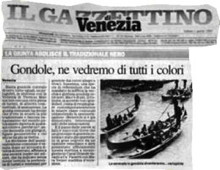 According to legend, after the Black Plague struck Venice in the sixteenth century, it was decreed that all gondolas used on the city's canals should be painted black, as a tribute to the victims. Whether or not this story is true, the gondolas of Venice have traditionally been black for hundreds of years.

But on 1 April 1995, the newspaper Il Gazzettino Venezia revealed that the city council had decided that henceforward all the gondolas would be colored red, yellow, blue or green. The hulls of the boats would also be decorated with swirls and geometric shapes.

The city council made this decision after conducting "thorough market research on the tastes of tourists and Venetians." Apparently people were tired of seeing "dismal" boats plying the canals of Venice, so the council had decided it was time to liven things up.

The public was invited to view the new "gondola rainbow" that morning in front of Ca' Farsetti on the Grand Canal.

The city council had also seen an opportunity to increase revenues by allowing the corporate sponsorship of gondolas. The first company putting its brand name on the side of a gondola would be Benetton. 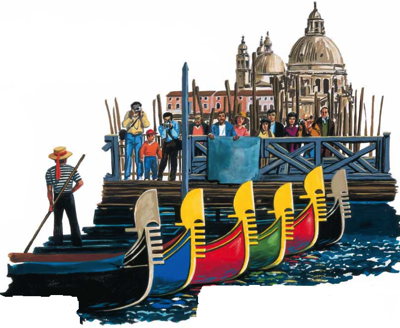