The Berliner Illustrirte Zeitung reported the discovery that Leonardo da Vinci had originally painted the Mona Lisa frowning, not smiling. As a result, the Louvre had restored the painting to its original condition. But because the Mona Lisa's unhappy scowl seemed to rob the painting of much of its charm, the museum's directors were considering changing the frown back into a smile. 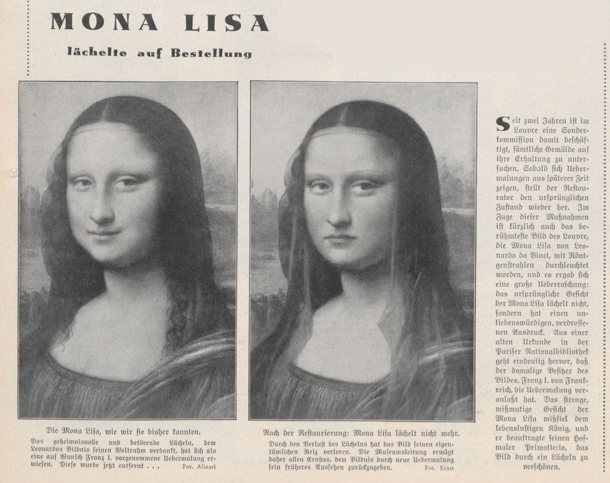 [In the picture on the left:] The Mona Lisa as we have known her up to now. Her secretive and beguiling smile has earned worldwide fame for Leonardo's picture, but this has proven to be an overpainting ordered by Franz the First. That has now been removed.

[In the picture on the right:] After the restoration, the Mona Lisa no longer smiles. Because of the loss of her smile, the picture has lost its unique attraction. As a result, the museum's directors are seriously considering returning the picture to its old appearance through a new overpainting.

For two years a special commission has been established in the Louvre which is examining all pictures for their preservation. As soon as they discover that a picture has been painted over, a restorer brings them back to their original condition.

In the process of these examinations, the famous painting of the Mona Lisa by Leonardo was x-rayed, revealing a great surprise. The original face of the mona lisa did not smile, but rather had an unattractive scowling expression. From an old document in the national library of Paris it is clearly established that the then owner of the picture, Franz the First of France, ordered the overpainting. The jovial King disliked the stern unfriendly face of the Mona Lisa, and he ordered his court painter to improve the picture with a smile.
April Fool's Day Art Hoaxes German April Fool's Day Hoaxes April Fool's Day, 1935
Tweet