The U.S. Army announced the launch of a "Military Working Cat Program" at the Old Guard in Virginia. Cats would work alongside military police, assisting them with narcotics detection, tracking criminals, and taking down criminals.

The program sought to take advantage of the olfactory and hearing prowess of cats, which is superior to that of both humans and dogs.

Unfortunately the program had gotten off to a rocky start, with a lot of soldiers "scratched up pretty badly." However, one cat, Gino, had already successfully graduated from the program. 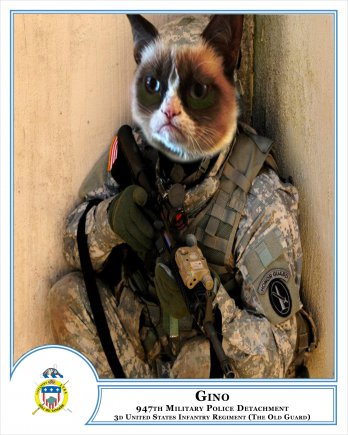 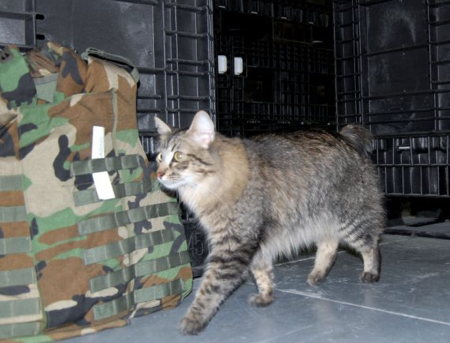 
JOINT BASE MYER-HENDERSON HALL, Va. (April 1, 2013) -- The 3d U.S. Infantry Regiment (The Old Guard), is doing its part to cut down on military spending with the implementation of a new cutting-edge program which will use military working cats to work alongside military police.

Currently, U.S. Army Military Police, or MPs, most often use German Shepherd and Belgian Malinois dogs for narcotics detection, tracking criminals and for taking down criminals, thus reducing the risk of injury to MPs.

"I think it's a great idea," said Sgt. 1st Class Tyler Radmall, platoon sergeant, 947th Military Police [MP] Detachment, 3d U.S. Infantry Regiment (The Old Guard). "There are so many homeless cats in the Virginia area. Not only will the Army have a more cost-effective working animal, but we will be doing our part in getting them off of the streets and finding them employment."

Officials hope to capitalize on cats' olfactory and hearing prowess. While most people think of dogs as having sharp senses, cats actually have more acute senses.

For example, dogs can hear five times more acutely than humans, and cats about twice as acutely as dogs. Also, a domestic cat's sense of smell is about fourteen times as strong as a human's.

Soldiers around the regiment have been doing their part to support the program by capturing stray cats in their neighborhoods and bringing them into the detachment located on Joint Base Myer-Henderson Hall, Va. More than 100 cats have been collected since the program started earlier this month.

The cats will have to go through a screening process to determine their "trainability." They will be assessed with regard to how quickly they learn tasks, what motivates them (play versus food), and their sociability. Cats that cannot be motivated to take direction, or that do not get along with humans or other animals, will be ejected from the program.

Cats that fail out of the program will be distributed to no-kill facilities and adoption centers throughout Northern Virginia.

While the program is new, and graduation rate data are not yet available, the MPs setting up the program have high hopes for the success.

"It's better to use these cats because they are a lot quieter, sneakier and quicker than most of our dogs," said Radmall. "They will also be able to get into some of the smaller crawl spaces to sniff out bombs if necessary."

Radmall added this skill will especially help MPs who are deployed. However, he admitted the program has gotten off to a rocky start. Some of the strays collected for the program have "limited human interaction and social skills."

"It has been a rough process," said Radmall. "A lot of our Soldiers were seen at the regimental aid station because they were scratched up pretty badly by the cats."

On the contrary, Radmall said this will be another great advantage of employing the military working cats.

"Cats' claws are razor sharp, so it makes for a good defense mechanism not only for the cat but for their handler as well," said Radmall. "A young, healthy cat can jump over eight feet in a single bound so if an enemy approaches a cat, the cat will be able to jump on him and either disable him, or claw him to death if he fails to stop resisting capture."

Other issues have arose, of course, with integrating the two species. As the program is still in its infancy, funding is not yet available for separate kennels for the cats.

"It's like sibling rivalry," said Radmall. "We've had to break up quite a few fights between the felines and the K9s. You can definitely tell the dogs aren't pleased with the possibility of the cats moving in on their territory."

Radmall continued to say they will keep the dogs currently in the program, but will only accept cats from this point forward.

Radmall is confident that the kinks in the program will be worked out over time despite the issues they have had so far.

"We've already had one cat successfully graduate through the program, and we're looking forward to having many more to follow in his footsteps," said Radmall. "While the other cats in the program might not understand the gravity of his achievement, Gino serves as a role model for them. He exemplifies the Army Values."