Popular Photography Magazine ran a special feature on how to touch up photos in which subjects have unsightly wrinkles or unattractive expressions. "Can these photos be saved?" the article asked. One of the examples used was Dorothea Lange's famous Depression-era photo of a "Migrant Mother" huddling with her children in a roadside camp outside Nipomo, California.

Under the masterful touch of Popular Photography editors, the Migrant Mother was transformed from an iconic symbol of the struggle for survival into a smooth-faced suburban soccer mom. Her wrinkles were erased, her gaze softened, and the poverty-stricken kids removed. Readers were appalled. The editors later noted that the article "generated more responses than anything we've done in years… Most of our readers got the joke. But many didn't. We received hundreds—yes, HUNDREDS—of rants, hate letters, and excommunication threats." 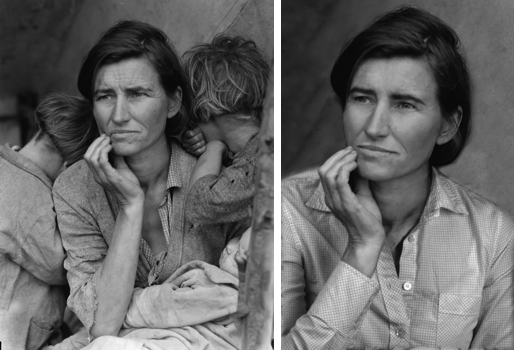