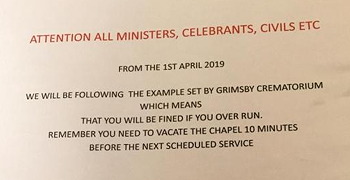 At a crematorium in York, England, a notice appeared on the bulletin board warning that ministers, celebrants and funeral directors would now face fines of up to £200 if their services ran over by even a few seconds. The announcement was lent credibility by a recent case in Grimsby in which a grieving family had been fined when its service went longer than its allotted slot. However, when contacted by the press, the City of York Council insisted that no such policy was planned, describing the announcement as a prank "in poor taste".