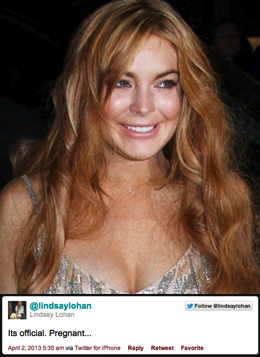 26-year-old actress Lindsay Lohan tweeted that she was pregnant. She posted the announcement at 10:35 pm (west coast time) on April 1st, which caused confusion because it was already April 2nd on the east coast. Therefore, her followers weren't sure whether or not she was joking. She clarified her intent the following day by tweeting, "April Fools. Where's everyone's sense of humor?" Then she deleted the posts.