The Honolulu Star-Bulletin reported that Norwegian scientist Dr. Thorkel Gellison (an authority on prevaricana) caught the largest fish ever recorded while on holiday in Hawaii. He took the fish, which was of the species Gellisoni Fabricata, "with ordinary Mason & Dixon line, with a leader of Associated Press wire." 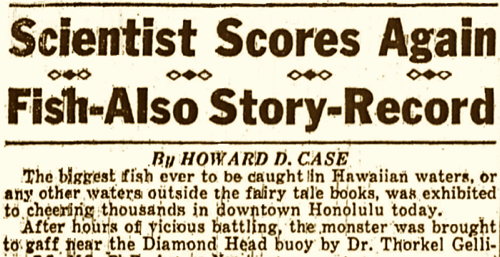 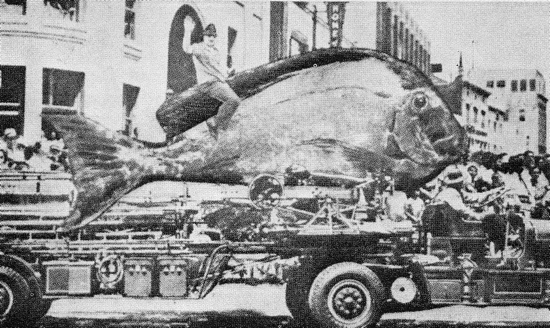 The biggest fish ever to be caught in Hawaiian waters, or any other waters outside the fairy tale books, was exhibited to cheering thousands in downtown Honolulu today.

After hours of vicious battling, the monster was brought to gaff near the Diamond Head buoy by Dr. Thorkel Gellison, B.S., M.S., Ph.D., famous Norwegian scientist and authority on prevaricana. Four Young Bros. tugs were required to tow the leviathan into port.

"It was nothing," smiled Dr. Gellison. "I have not only caught bigger fish but have told bigger fish stories."

The doctor explains that this titanic fish is very common in the Norwegian fjords, particularly Model A, and that very often they are captured and tamed and ridden with saddle and bridle.

Scientific name for the great fish is Gellisoni Fabricata, it having been discovered by Dr. Gellison's great-great grandfather, Lars Rasmus Gellison, who started the first Norwegian sardine cannery.

Had Good Line
Dr. Gellison says the mammoth fish was taken with ordinary Mason & Dixon line, with a leader of Associated Press wire. Bait was furnished by Lures & Cooke. It was gaffed with the boat anchor by two wrestlers who were fishing with the noted scientist.

"The marvelous catch," Dr. Gellison explains, "was the result of another of my scientific investigations. For many years I have fished in streams and lakes in my homeland with dry flies. When I went to sea Friday — that is the best fish day as you probably know — I was determined to find out how Hawaiian fish would react to dry bait.

"The driest bait I could think of was a copy of the Congressional Record. So I put one on my hook and started to troll.

"Thirty minutes later the strike came. Ten minutes later we were off Molokai. We were at a loss to understand what we had hooked. Then our quarry leaped from the water, fully 300 feet into the air, and we saw that without any question we had the biggest fish and fish story in the world.

"We fought him all day Friday and far into the night. Once we were off Kauai. And once we shot past Hilo harbor at fully a hundred miles an hour.

"He leaped and he dived, drenching us with spray, threatening at every moment to overturn the boat. It reminded me of my exciting fishing days in dear old Norway."

Honolulu anglers admitted today that Dr. Gellison's fish is the largest ever seen in these parts, and that his story is the tallest.

Feared Cauliflowers
According to Dr. Gellison, the great fish died of a broken heart after the thrilling battle.

"This type of fish is very sensitive," the scientist says. "They are very docile in captivity but cannot tolerate roughness of any kind. I am afraid this one, figuring he was going to be captured and tamed, caught sight of the two wrestlers. He probably got the idea that they intended to use him for trying out new holds, and the shock killed him."

The noted scientist will have the monster fish mounted and will present it to the Srail Museum of Norway.