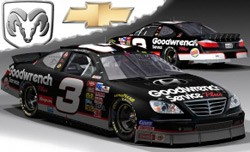 Car and Driver Magazine revealed that the White House had ordered GM and Chrysler to stop participating in NASCAR by the end of the 2009 season, deeming it an "unnecessary expenditure." Failure to comply would disqualify them from receiving any additional bailout money from the government.

The White House explained: "In order to receive this money, corporations must demonstrate they will spend it wisely. Racing has been said to improve on-road technology, but frankly, NASCAR almost flaunts its standing among the lowest-tech forms of motorsport. NASCAR is not proven to drive advancements that transfer from the racetrack to the road, and this nation's way forward does not hinge on decades-old technology. We need new, and we need innovation."