The Honolulu Star-Bulletin reported that motorists near Waikiki were shocked to see an enormous prehistoric lizard crawl out of a drainage canal and stretch out on a golf club fairway. But famed Norwegian scientist Dr. Thorkel Gellison assured everyone that the creature was harmless. It was a rare species of Gigantica fibicus that had been frozen in ice for 100,000 years before he thawed it out and brought it with him to Hawaii. He explained that it liked to dive into the drainage canal after golf balls, which it thought were the eggs of the extinct Hooey bird. 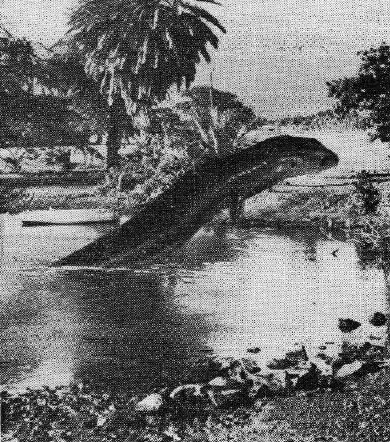 Motorists on Ala Wai Blvd. early today were amazed to see a great lizard-like reptile crawl out of the water at the waikiki end of the drainage canal.

Seven of them immediately resolved never to attend another weekend party. Several stopped to watch, but kept their motors running. The rest rushed to nearby telephones and notified the police, the FBI and the dogcatcher.

But by the time the riot squad had sneaked up on the scene, the enormous stranger had crawled out of the water and stretched its 40 feet on one of the golf club fairways.

And, gently stroking its head, while feeding it peppermints from a paper sack, was a dapper little man with trim mustache who spoke softly to the reptile in a strange tongue.

After smilingly informing those present that there was nothing to fear from the reptile, Dr. Gellison explained its presence, slyly slipping one of the peppermints into his own mouth.

"He is a rare species of Gigantica Fibicus," said the noted savant. "While exploring last year in Spitzbergen, I discovered him frozen in a great mountain of ice. I chipped him out and had him taken to my camp, where I thawed him out over a fire. In a couple of days he was as good as new, and here he is."

Dr. Gellison said the reptile had been in the ice mountain at least 100,000 years.

"I arrived yesterday by submarine from Fjoolem, which is near Hjokem. Glancing at the calendar, I knew my Honolulu friends would expect me to visit them today. And here I am.

Then he told why his giant lizard pet, which he calls Fibbie, was in the Waikiki canal.

"He has been diving for golf balls," he said, "and has found dozens of them. He is crazy about them. I do not know for sure why he likes golf balls, but I think he believes they are the eggs of the extinct Hooey, the only bird known to science that laid round eggs.

"My studies have proved that Hooey eggs formed part of the diet of these great lizards."

And Dr. Gellison led his strange pet away, back to the submarine that was to take them to the far places, to new adventures and discoveries.