The April 2000 issue of Esquire magazine included an article titled "There Are No Free Wheels" about a company called Freewheelz. The business plan of this company was to provide drivers with free cars. In exchange, the lucky drivers had to agree both to the placement of large advertisements on the outside of the vehicle and to the streaming of advertisements on the radio inside the car.


About the Company
The company, stated the article, had already begun a limited but very successful rollout of this offer in Barrington du Lac, a posh suburb of Chicago. Strict criteria limited the number of people eligible to receive a free car. Not only did prospective clients have to guarantee they would drive over 300 miles a week, but also they had to complete a 600-question survey that probed into personal information such as their political affiliations and whether they were concerned about hair loss. Finally they had to submit their family's tax returns, notarized video-store-rental receipts, and a stool sample. 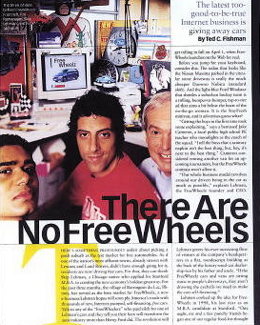 The article went on to explain that the first company to sponsor these free cars was Stayfresh Tampons. Supposedly a number of minivans were already on the roads displaying the tampon advertisements. Other potential sponsors were DearSkin.com, a company described as "an eco-marketing venture that sells leather coats and gloves made exclusively from the hides of deer that have been humanely culled from suburban woods."

Skip Lehman, founder and CEO of Freewheelz, was quoted in the article as saying that he had come up with the concept for the company while brainstorming with some friends. They had been trying to think of all the things that could be distributed free via the internet: computers, internet service, music, Web pages, cigarettes, booze, dates. Then it had occurred to Lehman: free cars!


The Hoax
The entire article, written by Ted Fishman, was actually a satire of the much-touted "new economy" spawned by the internet. Attentive readers would have caught on to the joke if they had noticed that Freewheelz's official rollout on the web was slated to occur on April 1. However, readers who did not notice this barraged the offices of Esquire magazine with phone calls, demanding to know how they could sign up to drive a Stayfresh minivan.

The satire also went over the head of the CEO's of a number of real internet start-ups with business plans similar to that of the fictitious Freewheelz, companies such as Mobile Billboard Network, Freecar.com, and Autowraps.com. Larry Butler, CEO of freecar.com, later confessed to Fishman that he was so scared at the prospect of this new competition that he cried when he first read the article.


Freewheelz.com
Fishman extended his joke onto the internet by registering the domain freewheelz.com. Fishman later said that, via this website, he heard from advertisers who did not realize the company was a joke, seeking to become sponsors.

A few months after the article ran, Larry Butler of freecar.com bought the freewheelz website from Fishman for $25,000. It had cost Fishman only $70 to register it. Fishman split the profit with Esquire, but even so netted a 178-fold return on his investment.