BMW Canada boasted of the new "Retina-evaluating sensory technology" (R.E.S.T.) technology available as a feature in its new cars. This system scanned the eyes of the driver to detect sleep. When detected, the system took full control of the car, allowing the driver to nap peacefully. "Lose consciousness, not control," the ad declared. 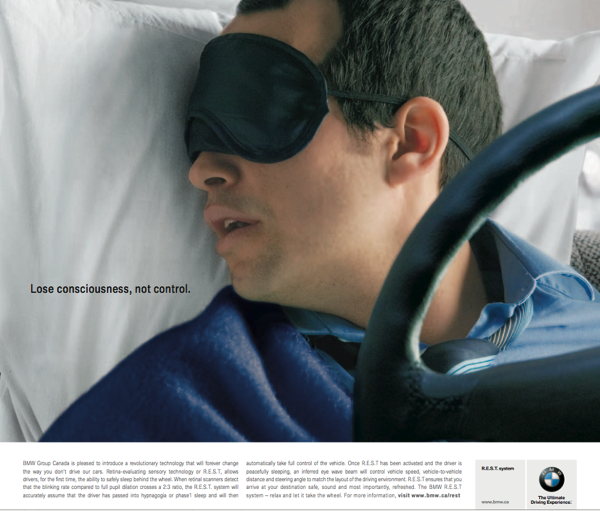 Lose consciousness, not control.
BMW Group Canada is pleased to introduce a revolutionary technology that will forever change the way you don't drive our cars. Retina-evaluating sensory technology or R.E.S.T., allows drivers, for the first time, the ability to safely sleep behind the wheel. When retinal scanners detect that the blinking rate compared to full pupil dilation crosses a 2:3 ratio, the R.E.S.T. system will accurately assume that the driver has passed into hypnagogia or phase1 sleep and will then automatically take full control of the vehicle. Once R.E.S.T. has been activated and the driver is peacefully sleeping, an inferred eye wave beam will control vehicle speed, vehicle-to-vehicle distance and steering angle to match the layout of the driving environment. R.E.S.T. ensures that you arrive at your destination safe, sound and most importantly, refreshed. The BMW R.E.S.T. system — relax and let it take the wheel.
April Fool's Day, 2004 BMW's April Fool Hoaxes
Tweet