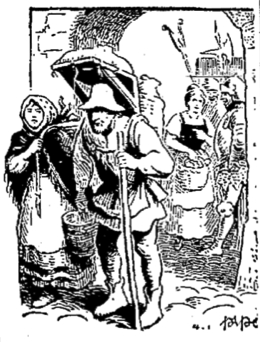 At the beginning of the 17th century, Lorraine was a duchy within the Holy Roman Empire, but during the conflict of the Thirty Years' War, the Kingdom of France decided to annex it and mounted a successful invasion. The Duke of Lorraine, Nicholas Francis, and his wife were ordered to be held as prisoners within the walls of Nancy, the capital city of Lorraine.

However, immediately the Duke began to plot his escape. He laid the groundwork by repeatedly circulating false rumors of his getaway. The Count de Brassac, French governor of Nancy, upon hearing these rumors would send a soldier to see if they were true or not and always found the Duke and Duchess under the watchful eye of their French guard. So, after a while, the Count began to grow wary of all new escape reports.

However, on April 1, 1634, the Duke and Duchess escaped for real by disguising themselves as peasants and walking out through the front gate of the city.

Their escape was almost foiled when a peasant recognized them and ran to tell a soldier, who communicated the news to his commanding officer. However, it being April 1st, the officer thought he was being made an April Fool (or a Poisson d'Avril, as the French say) and didn't believe the report.

Two hours later, the officer told Brassac what he had heard, and Brassac also assumed it was an April Fool joke. By the time the French realized the report of the escape wasn't a joke, the Duke and Duchess were too far away to be overtaken.

With such old stories, it's always difficult to know how many of the details have been embellished. However, it's definitely true that Duke Nicholas Francis did escape from Nancy in April 1634. So it's quite plausible that he used April 1st as cover for his getaway, which suggests that by the early 1600s April Fool's Day was a well-established tradition within this part of Europe.


Variant Version
Another version of the story has it that the Duke and Duchess escaped not by disguising themselves as peasants, but rather by swimming to safety across the Meurthe River. This version of the story was featured in a 1932 Ripley's Believe It or Not comic strip. 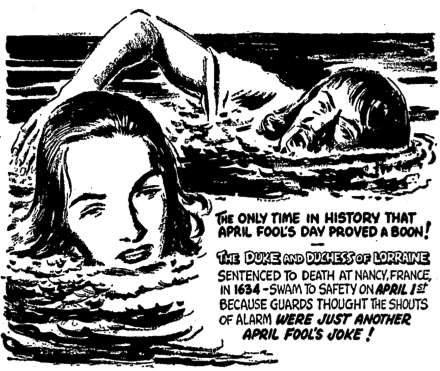