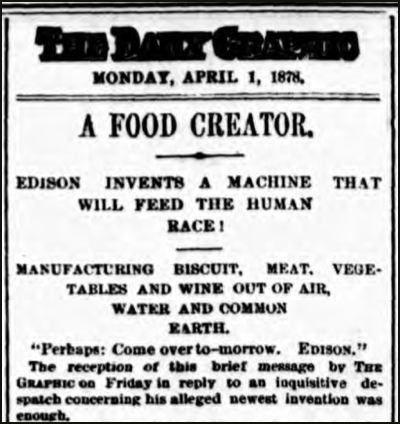 After Thomas Edison invented the phonograph in 1877, Americans were quite willing to believe there was no limit to his genius. They were sure he could solve any problem he focused his powerful mind on. Therefore, when the New York Graphic announced in 1878 that Edison had invented a machine capable of transforming soil directly into cereal and water directly into wine, thereby ending the problem of world hunger, it found a willing audience of believers.

Newspapers throughout America copied the article unquestioningly and heaped lavish praise on Edison. The conservative Buffalo Commercial Advertiser, in particular, waxed eloquent about Edison's genius in an editorial that dwelled upon the good fortune of a man like Edison having been born in the progressive nineteenth century when his genius could be appreciated. "Let steady-going people whose breath has been taken away by the pace we seem to be driving at just now, take heart therefore," it declared. "And be thankful that the genius of true benefactors of the race, like Edison, cannot now be crippled and blighted by superstition and bigotry, as it was when Galileo was forced to recant the awful heresy that two and two make four."

The New York Graphic took the liberty of reprinting the Advertiser's credulous editorial in full. Above the article it placed a single, gloating headline: "They Bite!" 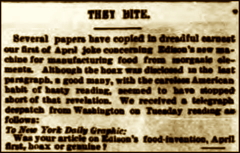