The Sunday Times revealed that London Transport soon planned to start using driverless buses within the city. The buses would follow a magnetic track while cameras scanned the road, relaying images back to a controller at headquarters who could switch the vehicle to manual drive and steer it out of trouble, should that be required.

LT hoped the plan would prove a "dynamic money-winner." Although a public opinion poll conducted for the Sunday Times noted 100% public opposition to the plan. 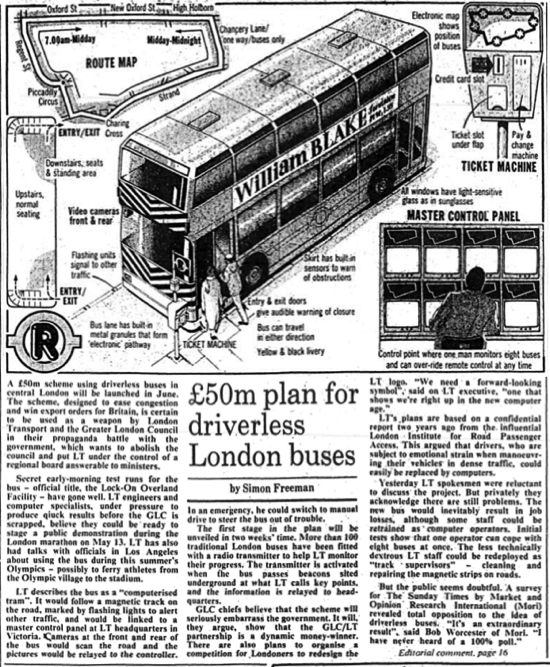 In addition to the general technological implausibility of driverless buses in 1984, the article offered several textual clues that it was a joke. The first letters of the official name of the bus, the "Lock-On Overland Facility," spelled LOOF, or FOOL backwards. And the first letters of the name of the agency promoting the bus, the "London Institute for Road Passenger Access," spelled LIRPA, or APRIL backwards.

In an editorial comment posted later in the paper, the Sunday Times offered the opinion that the idea of driverless buses was "deeply disturbing"


"There are too many buses in London already. They obstruct cars and motorcycles, interfere with pedestrians crossing the road and slow down the flow of traffic. Any plan, moreover, which puts drivers on the dole for the frivolous reason of advancing the new technologies of the 1980s is to be deplored."

However, it went on to say that the innovation perhaps said "much about the dismal tenor of the times — or maybe it is just something to do with today."

Text of the article

A £50m scheme using driverless buses in central London will be launched in June. The scheme, designed to ease congestion and win export orders for Britain, is certain to be used as a weapon by London Transport and the Greater London Council in their propaganda battle with the government, which wants to abolish the council and put LT under the control of a regional board answerable to ministers.

Secret early-morning test runs for the bus — official title, the Lock-On Overland Facility — have gone well. LT engineers and compter specialists, under pressure to produce quick results before the GLC is scrapped, believe they could be ready to stage a public demonstration during the London marathon on May 13. LT has also had talks with officials in Los Angeles about using the bus during this summer's Olympics — possibly to ferry athletes from the Olympic village to the stadium.

LT describes the bus as a "computerised tram". It would follow a magnetic track on the road, marked by flashing lights to alert other traffic, and would be linked to a master control panel at LT headquarters in Victoria. Cameras at the front and rear of the bus would scan the road and the pictures would be relayed to the controller. In an emergency, he could switch to manual drive to steer the bus out of trouble.

The first stage in the plan will be unveiled in two weeks' time. More than 100 traditional London buses have been fitted with a radio transmitter to help LT monitor their progress. The transmitter is activated when the bus passes beacons sited underground at what LT calls key points, and the information is relayed to headquarters.

GLC chiefs believe that the scheme will seriously embarrass the government. It will, they argue, show that the GLC/LT partnership is a dynamic money-winner. There are also plans to organise a competition for Londoners to redesign the LT logo. "We need a forward-looking symbol," said one LT executive, "one that shows we're right up in the new computer age."

LT's plans are based on a confidential report two years ago from the influential London Institute for Road Passenger Access. This argued that drivers, who are subject to emotional strain when manoeuvring their vehicles in dense traffic, could easily be replaced by computers.

Yesterday LT spokesmen were reluctant to discuss the project. But privately they acknowledge there are still problems. The new bus would inevitably result in job losses, although some staff could be retrained as computer operators. Initial tests show that one operator can cope with eight buses at once. The less technically dextrous LT staff could be redeployed as "track supervisors" — cleaning and repairing the magnetic strips on roads.

But the public seems doubtful. A survey for The Sunday Times by Market and Opinion Research International (Mori) revealed total opposition to the idea of driverless buses. "It's an extraordinary result," said Bob Worcester of Mori. "I have never heard of a 100% poll."