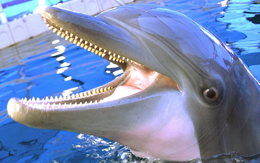 Robert Siegel, of NPR's All Things Considered, reported on an effort to record the experiences of U.S. Navy dolphins in their own words. The dolphins were aquatic veterans housed in a home for retired dolphins in landlocked Belleville, Illinois.

Graduate students prompted the dolphins to speak by feeding them fish and then recorded their chatter with underwater microphones.