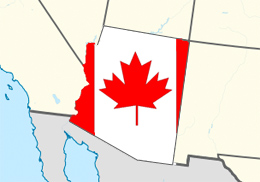 NPR's All Things Considered revealed that the Reagan administration had decided to sell the state of Arizona to Canada. Money from the sale would help reduce the national debt, and Canada, for its part, as the Canadian ambassador to the US explained, was eager to acquire a warm-water port "and this was the best we could do."

Former governor of Arizona Bruce Babbitt, who had recently dropped out of the race for the presidency, had been offered the job of running the new province. He had accepted the position, saying it was apparent that Canada had "greater faith in my ability to lead."