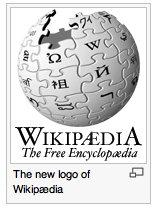 Wikipedia announced it was being taken over by Encyclopædia Britannica, in exchange for a £133.7 million severance package given to each of the five trustees of the Wikimedia Foundation.