The Bristol Zoo Gardens announced it was conducting an experiment to gauge the sensory sensitivity of gorillas. They hoped to find out "whether the scent of humans in a gorilla's environment can be picked up even after the humans have gone." The humans, of course, would need to be naked in order to leave the strongest scent behind. Christoph Schwitzer, Head of Research, explained: "Tending to the plants and flowers within the many animal enclosures at the Zoo is an important and necessary job for our team of gardeners. Now we are keen to get to the bare facts of whether their presence leaves a significant scent mark within the enclosure which can be picked up by animals. We are monitoring the gorillas' behaviour following gardeners carrying out work on Gorilla Island – once fully clothed, as a control group, and again without clothes, to see if there is a significant difference. The zoo released photographs of the naked phase of the experiment. The zoo later admitted that the experiment never took place, although "it is true that gorillas have a good sense of smell and are able to detect strong odours in their environment such as human sweat or the musk of an unknowngorilla." link: Bristol Zoo 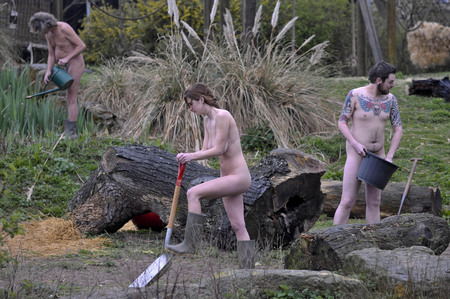