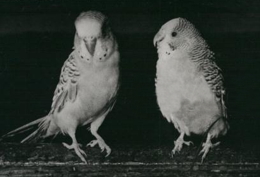 She hoped eventually to expand her business to include gerbils as well. [listen to the broadcast]


Polly on a Cracker

The more we at the food show examine the food chain, the more we're astonished by the vast number of foods we didn't even know existed. For instance, last week I talked with Mrs. Fiona Curtis of Willowdale, Ontario. She operates a rather novel wholesale frozen food business, from the basement of her house.

Reporter: Mrs. Curtis, exactly what is your profession? What do you do?

Mrs. Curtis: Well, I supply ... I guess you would call it gastronomical shops... speciality shops... with stuffed budgerigars, which I breed myself.

R: Now, that's the budgie you would normally have in your home, and you would keep in a pretty little cage and it would sing to you all through the day. It's a normal pet.

R: It's a most unusual industry. It's not one that I believe I've ever heard of before.

C: No, and I'll tell you how I thought of it. My husband used to keep pigeons. We lived in a small Ontario town named Restville, and I was downtown one day and the pet shop was closing, and so I went in and I bought 25 budgerigars for 25 cents each. Brought them home, and my husband made a sort of a joke. He said, "Little nippers would be neat to eat." And I just thought it would be fun to try. And we tried them, and actually they were quite delicious.

R: Is there much meat on them? They seem to be so small.

C: No, but the incredible thing about them is that you can eat the bones as well. They just crunch. After all, in the European countries they eat small-boned starlings. They're quite fancy. And so I tried them. Now the big thing about it is, in my selling what I do is I use a three-part stuffing. I use chestnut stuffing, and I use a plain onion and bread stuffing, and I also use a squid stuffing.

R: Squid as in the ocean squid?

C: Right. I mash them up with bread and paprika. So what I sort of settled on now is that I went around to all the stores and tried to figure out a market. And I found they were quite interested, especially in Toronto, and now we're starting in Vancouver.

R: Were these the larger chains, or the smaller speciality shops?

C: Smaller speciality shops. And what I do is I package them myself. They're frozen, and we send them out, and they're doing extremely well. One of the advantages of an industry like this is it's so cheap. I have at the moment 50 breeding pairs, and about 400 marketable birds. And what I do is, of course, grow my own seed. Even if you live in a city, you can grow your own seed. Which makes it very economical.

R: Are there any other expenses that one would have, other than seed?

C: Well, yes. Packaging materials, of course, but that's very little because I use a foil bag. I label them myself.

R: Do you think there are other markets in other areas that we haven't looked at. Budgies, perhaps, just might be the beginning. What about other... commonly known as household pets. What about raising dogs or cats? Have you thought of expanding to other areas?

C: Well, my husband and I have decided to extend to pigeons, but I mean that's quite ordinary. One of the things I was fascinated about were gerbils because they're really quite meaty and they grow very quickly. And so I would really like to extend later. You know, the more people we get from different countries, this incredible mosaic that we have in Canada, I think that the foods Canadians don't accept will become more popular.

R: If somebody wanted to try this, and wasn't near a speciality shop that sold your particular item, could they experiment with their own budgie? Either that, or buy a budgie at a local pet shop and give it a go?

C: Oh, certainly! They're quite cheap anyway. You just basically buy your budgie and then have a go. I've described how to do it. The main thing is... I've had friends who've tried it, and they really need a lot of spice. You see, one of the advantages of that type of meat is it is juicy. You know, it has a very, very high vitamin content. And you can eat the bones. It's incredible. The bones taste just like brittling. You know, brittle. And it's just delicious. But you must use spices because after all it is a delicacy. It has to be cooked properly. I generally cook them for, oh, about 15 minutes and then bast with butter and paprika, and then turn them and do them for another 15 minutes.

R: And how many would one budgie serve?

C: Only one person. It's bite size. I've marketed them under... we have a little slogan... "bite-sized budgerigars."

R: What about processed and frozen budgies? Is there a market there such as Swanson TV dinners? Is there a TV budgie dinner?

C: Oh, no. Well, that's awfully sort of low-class. It's not that sort of thing that we're aiming for. I mean, this is a delicacy. It's a speciality. I would never, ever do that sort of marketing and packaging.

R: Have you been approached by the broiler chicken marketing board? Is there a possibility of you falling under that sort of governmental control?

C: Well, yes we already do because we're inspected by them. It's rather funny to see how they react. I think though... we're getting a lot of inquiries now from Quebec, and I'm going up, in fact, next week to Montreal to talk to some of the people up there. And we'll see how it goes.

R: Mrs. Curtis, thank you very much. It's been delightful.