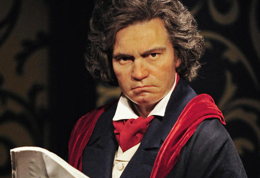 NPR's Weekend Edition revealed the discovery of a 10th symphony written by Ludwig van Beethoven. It had been found by Professor of Musicology Friedrich von und Zum Hagen while doing research in the library of New York's Masonic Hall. It was hidden inside a folder labeled "Johann Nepomuk Maelzl."

Maelzl was a 19th-century inventory (and exhibitor of the 'Automatic Turk' chess-playing machine). One of Maelzl's inventions, Zum Hagen noted, was a transcribing piano that produced a printed version of any piece of music played on it.

Zum Hagen speculated that Maelzl asked Beethoven to try out this piano "since the composer was very enthusiastic about technical advances." When Beethoven did so, the machine transcribed the 10th symphony. Maelzl then "absconded to America with the manuscript."