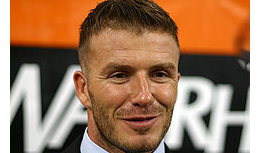 RTL Belgium disappointed soccer fans by reporting that soccer star David Beckham had fallen and fractured his coccyx while collecting Easter eggs with his children. "Beckham is clearly not as nimble at picking Easter eggs as he is with a football at his feet," the report noted.

Beckham suffered the injury while celebrating Easter in England with his family. He slipped on wet grass and fell violently backwards. He quickly realized he was hurt as he lay immobilized on the ground. A doctor examined him and declared that he would have to rest for the next six weeks, and would not be able to play as Paris Saint-Germain midfielder during this time.
April Fool's Day Hoaxes Involving Celebrities and the Entertainment Industry April Fool's Day Sports Hoaxes Benelux April Fool's Day Hoaxes April Fool's Day, 2013
Tweet