The Deutsche Allgemeine Zeitung reported that a Russian scientist, Professor Figu Posakoff, had discovered a method of "harnessing the latent energy of the atmosphere," the energy displayed in thunderstorms and other atmospheric catastrophes. Harnessing this energy would allow the Soviets to hurl objects "of any weight almost unlimited distances."


The prospects opened by the new invention are of incalculable importance and certainly surpass by far the discovery of steam and electric power. This discovery was the reason for the military blockade of Uralsk and vicinity while for weeks the experiments proceeded with astounding results, which extended far into the Caspian plain and Siberia, the details of which are being kept strictly secret.
The Soviets were said to have promised to use this discovery only for peaceful purposes. However the Allgemeine Zeitung noted that it would certainly give the nation a powerful advantage in warfare.

The New York Times ran the story on its front page on April 3, having failed to realize that it was a joke. 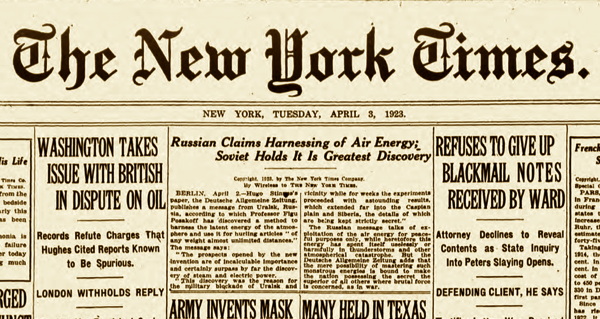