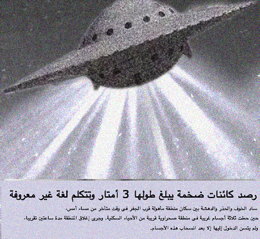 Jordan's Al-Ghad newspaper ran a front-page article describing the landing of three extraterrestrial spaceships the previous night in the desert outside the town of Jafr, in eastern Jordan. It reported that ten-foot tall, humanoid creatures emerged from the ships, speaking a language that sounded like "squawking." Their presence caused all electronics in the region to stop working. The ships also emitted an intense heat. Terrified local residents fled in panic, but after an hour and forty minutes, the alien visitors departed, leaving three large scorch marks on the ground.

Many of the residents of Jafr, unaccustomed to April 1st hoaxes, believed the article to be true. Frightened students didn't go to school, and the Mayor of Jafr considered evacuating all of the town's 13,000 residents (but ultimately decided not to). Security personnel searched for the aliens in the desert, but found nothing.